Givenchy launch first standalone collection for men. French fashion house, Givenchy have debuted their first ever stand-alone menswear collection in the hope of narrowing the lines between men and women’s fashion.

The British fashion designer admitted that although Givenchy has always tended to lead towards top fashion designs for women in the past, they now fully intend to concentrate on making their luxury fashion brand more inclusive to include men’s fashion that will have their own platform within the Givenchy family.

Chatting to UK newspaper, The Guardian, 48-year old Clare said: “The driving force for Givenchy has always been women’s, but now I want to bring the man into that world, [Givenchy] was the first one to do men’s for the couture but it’s time for men’s to have its own platform.”

“The idea is that you can wear this as a woman, just in a slightly different way to men, there is more interest, certainly this century, in blurring lines between men’s and women’s [fashion].”

Keller, who started her career working for fashion Calvin Klein in New York, was also responsible for designing Duchess Meghan’s wedding dress when she married Prince Harry in 2018. She went on to explain how she “expressed herself” through androgynous style, and that’s why she can relate to men who do the same thing.

Clare concluded: “I used to deliberately put a T-shirt under something chic because I didn’t want to look like my mother, it was how I expressed myself and it’s how I see Parisian boys express themselves too.”

Her own favourite look from her new Givenchy collection is their double-breasted suit paired with dramatic 70s-style flared trousers that she personally feels will appeal to the younger generation. 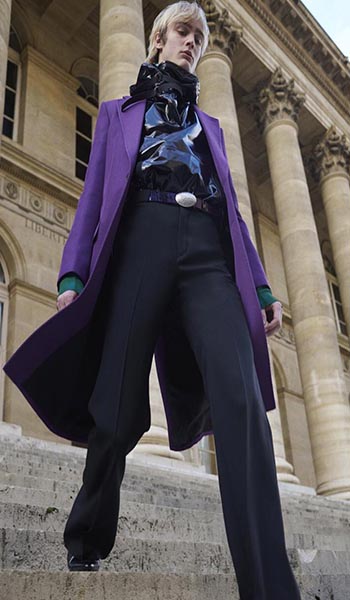