Time Magazine names Fenty Beauty one of 2018’s Most Genius Companies. Rihanna’s makeup company, Fenty Beauty, has been a celebrated member of the makeup world since the debut of their very first products.

Its continually evolving line of products has caught the attention of many, earning praise from social media and recognition from others in the industry.

After being named Time Magazine’s Best Invention of 2017, the beauty brand has earned another major honour.

Time Magazine has just named their top 50 Most Genius Companies of 2018, and Fenty Beauty is among those recognised.

Acknowledging the decision, Time wrote: “In only a year, Fenty Beauty has pulled off a makeover of the makeup industry.”

The publication goes on to say that Fenty has continually strived to make the makeup world as inclusive as it should be. “Fenty’s unabashed celebration of inclusivity in their makeup campaigns put an unprecedented spotlight on the need for diverse beauty products,”

The beauty brand reportedly made $100 million in sales in its first 40 days on the market, is now available in 29 countries and has sent competitors rushing to expand their own makeup lines.

If you take a look back over the history of Fenty Beauty, it’s not hard to see why it made the list. it was place alongside other top companies of 2018 such as AirBnB, Bumble, Domino’s, Nike, Nintendo and Spotify.

And with the makeup company just after announcing the launch of an upcoming holiday collection and four new shades of Stunna Lip Paint, it’s safe to say that the brand will be making more waves in the beauty industry. 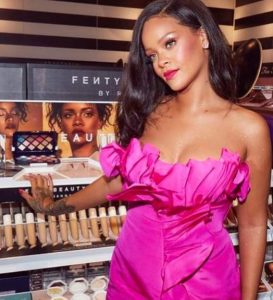