Lady Gaga gets tattoo in tribute to A Star Is Born

Taking to Instagram to share a picture of her new ink, Gaga wrote: “Happy Valentine’s Day. A tattoo toast to “la vie en rose” by the beautiful @winterstone my spinal cord is now a rose.”

In the film, the song La Vie En Rose, first made famous by Edith Piaf, plays an important part as it’s the song sung by Ally (Gaga) when drunken superstar Jackson Maine (Bradley Cooper) stumbled into her bar.

The tattoo saga didn’t end there though, as Gaga revealed another smaller tattoo at the same time.

She got the musical notes G-A-G-A drawn on a musical stave on her right forearm, but some fans were quick to point out her mistake.

Many music-minded fans pointed out to Gaga – who studied music theory at NYU Tisch School of the Arts – that music staves are made up of five lines not four.

Thankfully, it didn’t take much to correct the tat, with Gaga adding another line and blaming a certain drink on her mistake.

Sharing a picture of her corrected tattoo, she wrote: “Musical crisis averted. Too many tequilas forgot the fifth staff line poor thing. Here’s the real deal”

Meanwhile, Gaga and Cooper will be performing Shallow at this year’s Oscars, and potentially scooping up a few awards as well. 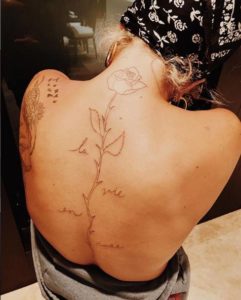 The singer turned actress unveiled her new ink on her Instagram

Lady Gaga gets tattoo in tribute to A Star Is Born