Bebe Rexha is furious designers won’t dress her for Grammys

Bebe Rexha is furious designers won’t dress her for Grammys. American singer, Bebe Rexha has lashed out at fashion designers who have ignored her requests to design her gown for this year’s Grammy Awards 2019 saying it’s down to her size.

The 29-year-old, New Yorker has been nominated in the New Artist and Country Duo/Group Performance category at this year’s 61st Grammy ceremony that is due to take place on Sunday 10th February 2019 at the Staples Center in Los Angeles.

The singer took to her social media account, Instagram to vent her anger and frustration at fashion designers who have blanked her request to make a custom-made gown because she is a size eight.

In her video blog on her Instagram account, Bebe said: “So I finally get nominated at the Grammys and it’s like the coolest thing ever.” And a lot of times artists will go and talk to designers and they’ll make them custom dresses to walk the red carpet … So I had my team hit out a lot of designers and a lot of them do not want to dress me because I’m too big.”

The “Say My Name” singer is furious that fashion organisers are sending out the wrong message to young girls who maybe a size eight or over, insinuating they may be too fat.

Rexha continued: “If a size 6-8, is too big, then I don’t know what to tell you. Then I don’t want to wear your f***ing dresses. ‘Cause that’s crazy … You’re saying that all the women in the world that are size 8 and up are not beautiful, and they cannot wear your dresses.”

It’s not all bad news for Bebe Rexha as American fashion designer, August Getty has stepped in to rescue her who already has fashion experience in designing for other major celebrities including Katy Perry, Kim Kardashian, Miley Cyrus and Paris Hilton.

The talented 24-year-old fashion designer who owns his own fashion label, August Getty Atelier responded to her post by saying “You are beautiful! Every woman of every size is beautiful! Just let me know when I should start sketching.”

All that remains to be seen is what special design August will design for the “I’m a Mess” singer.

Bebe Rexha is furious designers won’t dress her for Grammys 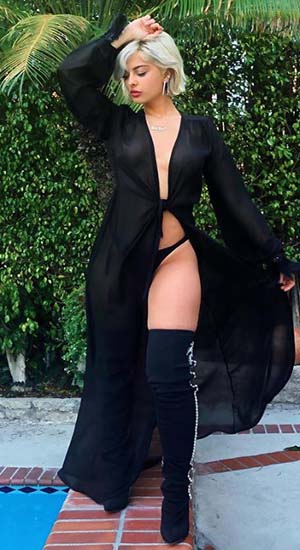